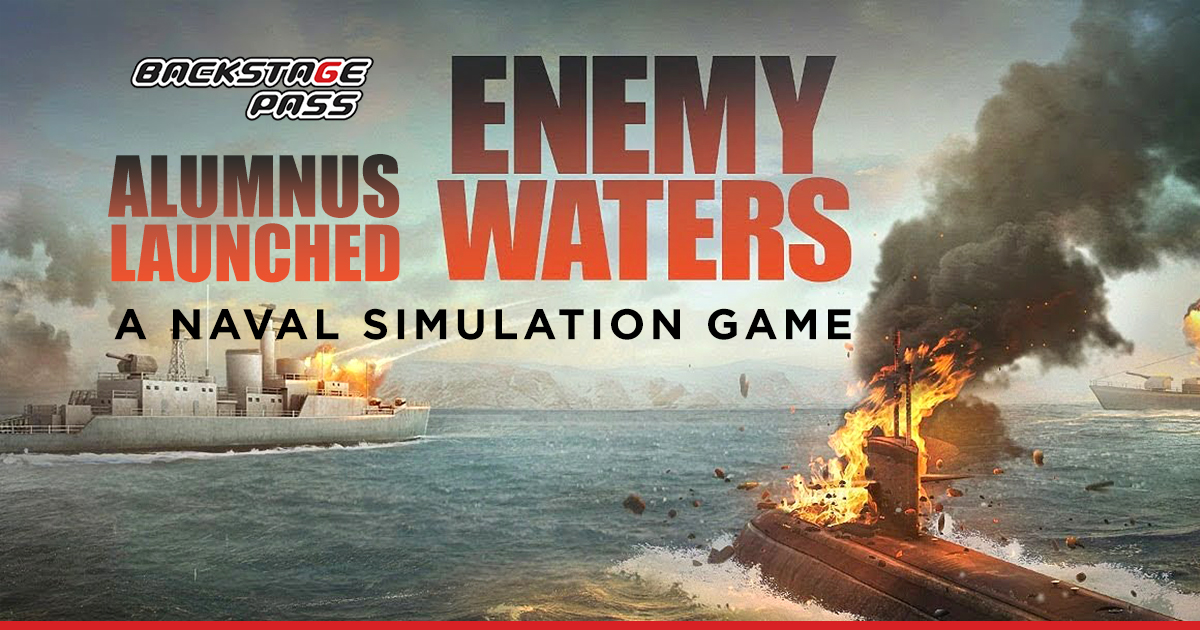 Enemy Waters is a naval battle simulator where you can command and manoeuvre warships and submarines to fight pirates. The aim is to defeat the enemy warships and submarines using deck guns, depth charges, and torpedoes (a torpedo is a cigar-shaped self-propelled underwater missile fired from a ship or submarine). By defeating your enemies, you can conquer seaports and oil wells.

The game features the submarines and warships from nine countries. They were used in World War II, Cold War, and some of them are part of the current fleets of leading navies.

This is an action-strategy simulation game where you ambush and destroy Pirate John’s convoy by laying the perfect trap. You are the captain of the ship and you can choose to sneak past Pirate John’s convoy or face their torpedoe salvo directly and launch a counter-attack before they destroy your ship. (A salvo is a slew of weapons released from one or more warship or submarine in quick succession.)

The simulation grade controls will let you fire missiles and torpedoes, engage silent running on your submarine to sneak past the enemies, control the depth of your submarine and dive into deeper waters as you escape the depth charge from enemy warships.

We bring you an exclusive interview with Satish Chandra, founder of TeaPOT Games and an alumnus of Backstage Pass Institute of Gaming & Technology:

Why did you choose to make a naval battle simulator?

“The inspiration to make this game came from the many anxious moments spent watching underwater war films. We wanted to create an authentic submarine experience for the gamers who play a lot of mobile games.”

Can you elaborate the stages the game went through from start to finish?

“The game’s combat mechanics went through many iterations to get that perfect balance between simulation and fun. We felt we were spending a lot of time experimenting without any sense of direction. However, in the end, we are satisfied with the well-balanced combat mechanics you see in the game. Our effort didn’t go in vain. All this was possible as we were very clear about our objectives and target audience.”

How difficult is it to play the game?

“At TeaPOT Games, we make hardcore games accessible to the mid-core mobile audience while sacrificing as little as possible on realism or attention to detail. This was the reason behind the success of our game, Avion Flight Simulator.

Enemy Waters is fairly easy to start, but as you progress and come to manage and lead a fleet of warships and submarines, you will compete with an even bigger enemy fleet. You will have to come up with your own tactics as the game slowly ramps up its level of difficulty. This is the challenge, and a big one in fact.”

Is it a multiplayer game? How do you get the best experience playing this game?

“We are working on the multiplayer part of the game at the moment. You can’t pay, buy stuff and win. Instead, you have to use the warships or submarines from the campaign. But unlike the single-player version of the game, you can only control one vessel(warship or submarine) in a 4 vs. 4 or 3 vs. 3 team battle.”

What challenges did you face? How did you overcome and what did you learn?

“One of the main challenges was optimising the game given that the game is both CPU and GPU-intensive. One of our major objectives was to have scalable graphics making the game look absolutely gorgeous on high-end devices and also be suitable for mid to low-end devices. This was not an easy task. We sank 2 months of work into optimising the game and found many unknown optimisation tricks in Unity 3D. We optimised the game to such an extent that it will run smoothly even on a 6-year-old flagship device. This is a major learning for us, something that we will certainly use in our upcoming games.”

Can you tell us about the monetisation aspects of this game?

“The game has two in-game currencies: oil and money. Both of these resources can be earned either by completing missions or by controlling oil wells and seaports. The player can purchase oil using real money and exchange the oil for money in a market that is inspired by the market system in AOE 2. In other words, the more you sell the less you will get for that particular resource. Every mission in the game requires a certain amount of oil to play, and the money is used to purchase new ships or perform repairs on the damaged vessels.”

Enemy Waters has been shortlisted for Indie Prize Showcase by Casual Connect USA 2017.

Check out the game play trailer and the game links on both Android and iOS.