Today, we are showcasing one of our faculty members, Sushil George. Sushil considers himself a Hyderabadi. He holds B.Tech. from JNTU, Hyderabad and has been working as a game developer for over 6 years now. 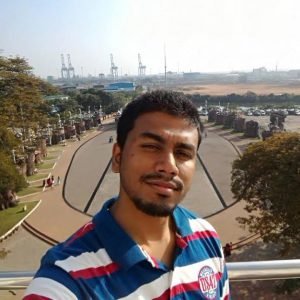 In hindsight, I see that games inspired me more than people as I was growing up. When I saw a DOS game load on a Windows 95 PC, I would get excited beyond words. I was playing all the games I could lay my hands, though the games were difficult to find in those days. The two years of junior college(Intermediate)that followed were busy years as I had to prepare for various engineering entrance exams. After joining B.Tech., I was back to playing games. I learnt C and Java as part of the courses in graduation, and the learning helped in my later years as a game developer.

Soon after I completed graduation in 2010, I joined Gameloft as a QA tester and understood the process of game development. A few months later, I left Gameloft and joined Backstage Pass to pursue the Advanced Diploma in Game Programming. The training has really helped in my later years as a game developer, thanks to my experienced and talented mentors. Later, I joined Avakai Games and since then, there is no looking back.

Gaming as a career is relatively new in India. The 40+ population in India hardly plays computer games. My parents do ask me occasionally if this is the right career for me. But I guess what matters to me is l feel at home in gaming. I believe that when I am at home in a particular area, I give it my best. And that is what important. At some point, money and passion will come together anyway.

Unless you have someone ready to invest in your venture, it is not really possible to start off as soon as you come out of college. So it is better to work for 3 to 5 years in a company. This will help you save some money for your venture and also give you a firsthand knowledge of how to run a game development team. When working, handle as many responsibilities as you can so that you know something about everything. And don’t forget to build in-depth experience in at least one chosen area of interest and keep networking by attending all the conferences within your reach.

Before you launch your own venture, ensure that you have released at least 1 or 2 games. That will help you understand what it takes to ideate, develop and release a game. Releasing a game is of great significance because the market not only teaches the process of and hurdles in marketing a game but also acts as a touchstone for your career.

Want to Pursue a Career?

This works fine for many of us. If you go abroad and get employed in a company with a good track record, you can probably retire from the same company. This is so because, in the West, the gaming industry is so well developed and is growing non-stop. They play games as individuals, families, friends and professional gamers. It means a healthy growth for the industry.India is not far behind as the job prospects are better than ever and will continue to grow.

No matter which way you want to go, give it your 100%. The most important thing: never stop learning and seeking newer game technologies.You will do just fine.

Wishing all of you a great journey in gaming.