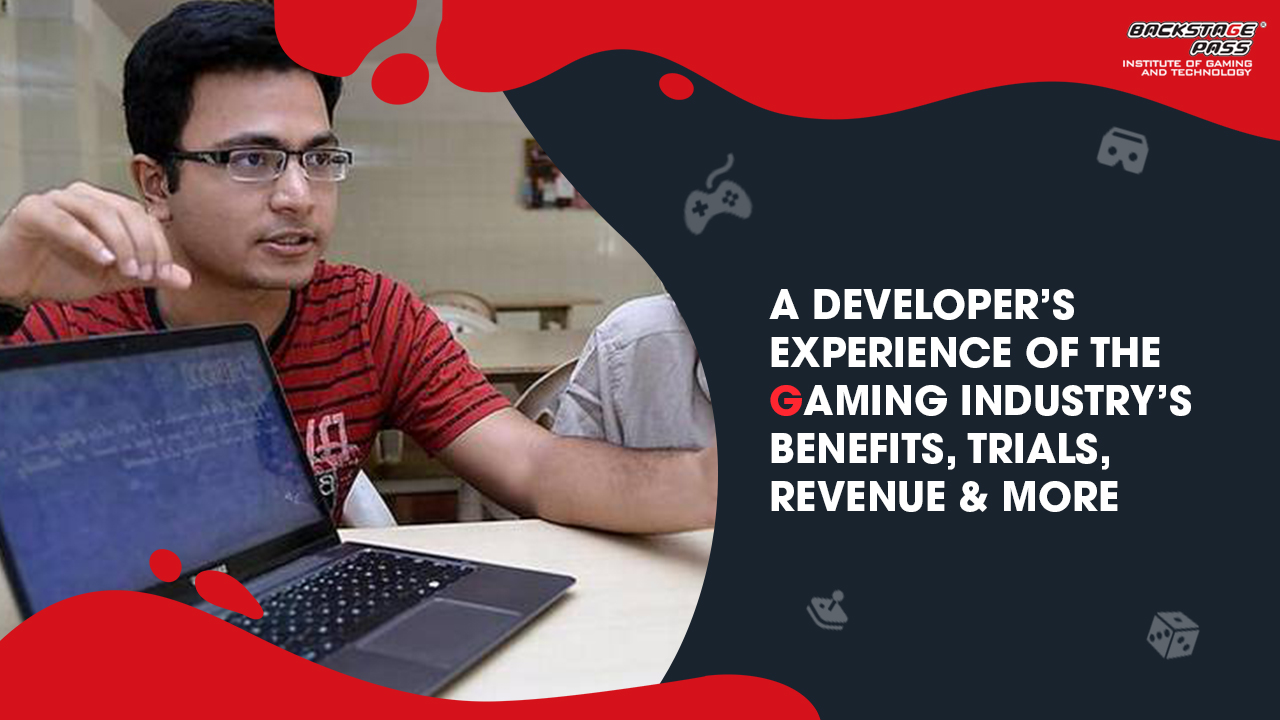 1) What inspired you to build games?

This is a funny fact given my career choice now but, I was studying Biology & Physics in 12th grade when I had a moment of realization that becoming a doctor was nowhere close to my dream. Simultaneously, my elder brother’s close friend joined Backstage Pass Institute of Gaming and Technology which how I first heard of this college. Seven years ago there was no roadmap to enter the Games Industry.  Backstage Pass is a pioneer in Game education in India as they provided a path for game enthusiasts to learn game development and job opportunities upon graduation. Before I joined BSP, I did a diploma in Animation and it gave me an introduction to this similar field, which strengthened my resolve to pursue a career in Gaming.

2) How did you choose game design as your profession?

Due to my background in BIPC, I did not have an option to choose programming therefore; the only two options were Game Design and Art. Further to this, Programming carried no interest for me.

3) What was your experience in Backstage Pass?

My experience in BSP was very good. It wasn’t like a regular engineering college. All my friends joined engineering college and complained about their mindless study material. In BSP, we were never made to do mindless work. We always knew exactly what we were learning and why.

We had mentors not teachers, which is of a big help when it comes to solving the problems the students are stuck at while developing their games, practical learning and detailed individual attention. Therefore, their mentorship approach is a big boon.

4) How did Backstage Pass support you during your course and after your graduation in your career as well?

If the college observes students with good potential, they’ll fund you like they funded my flight for Singapore and Russia to attend Game Developer events or competitions for which I was selected. They’ll do all they can to raise talented students to great heights. Travelling with their support has given me the necessary exposure which was crucial during my career as each game we build has to be for the global game industry.

5) Could you give a small brief about your career after graduation till now?

During my final year, I released a game called Avion Flight Simulator which received 10 million downloads cumulatively on all platforms which brought in decent amount of money. The revenue from this game helped to stabilize us, expand our team and garner couple of client projects – AR & VR applications even for construction companies so as to show how their building will look in 3D.

Railroad is our next simulator game which received half a million downloads on the Playstore. It gathered good enough revenue with regards to the investment put into the game.

6) Which games were you a part of developing? How did they fare in the market?

I have developed seven games until now.  Notable ones are –

Veer Hanuman with half a million downloads on Playstore. Mizcoin Company took a chance and developed this game with me. Fortunately, it did very well and I learnt a lot on how to make a game from start to finish practically.

Petite, which highlights the issues women go through in their lifetime. This game apart from doing well also received 13 awards.

Picto – which highlights issues a child goes through in a household with domestic abuse. It received 5 global awards.

Avion Flight Simulator – which I developed in my final year, received 10 Million plus downloads.

7) Many know that games are capable of generating good revenue but to make it even more clear, could you give an estimate on how much a game with 1M downloads, 5M downloads and 10M downloads can make over the years?

Retention is the key, meaning for how long the users actually play your games. Free games make money with ads. To give you a metaphor that will explain the change in the way games are generating revenue –

A few years ago, the games had a similar revenue model like the movies, where you pay for the game and then play it.

But with the advent of smartphones, it has now become like television wherein you play it for free but get an ad break in between. So, with these advertisements and some in-app purchases, we generate revenue.

Also in Avion, the revenue was generated partly from Advertisements and partly from in-app purchases. Therefore, the longer people play your games, the more money you make which is where retention comes in. To keep players entertained, quality of games should be top-notch. Now, retention is more important than downloads. In advertisements, for every thousand views, you approximately receive 10 dollars.

8) Which genre of games do you think has the best market potential in your experience?

Every year the trend changes in the Games Industry. When I started – parking games were in trend. Then endless runners like temple run came into picture. After that, Shooters like PUBG, Fortnite or racing games. Match3 games like Candy Crush are evergreen and idle clicker genre is doing really well right now. We have to always be attentive to market trends.

9) What aspects of the game should be concentrated upon in detail during game development?

There is one absolute way for games to be successful and a thousand ways for it to fail so everything should be good. The concept should be very strong along with a good team. Everything should fall into place for it to succeed. For example, even if concept and art are good but the programming falls flat, it will not be received well by the users.

One crucial part while developing the concept is to really think about how you can keep a player engaged in your game for a month or two months at minimum. We should be clear on how to keep making them come back. Focus on retention.

10) What advice and tips would you give young or potential game developers?

My advice is to have a realistic mindset when coming into the industry. Playing and making games is very different. For example, watching a movie and directing one are very different activities. Developing a successful game will be a learning but also a tough experience. Many people make the mistake of playing a game excessively and calling it ‘research’. You need to play a game for ten minutes and watch game play to assess it which is quite enough for research. People need to be aware that constant learning without working is procrastination.